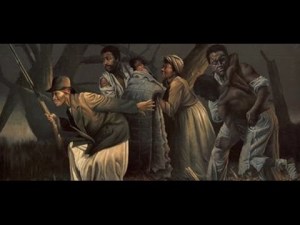 If you could go back to Harriet Tubman’s days and with what you know now, help her to free more slaves based on your knowledge of the future, would you be able to help her? With what you know about history today, would you be able to assist her in carrying more people to freedom? With all of the technology and historical knowledge and books and slave narratives and everything you’ve stored away to this point, could you honestly say that you could help her? Many of us don’t even know what direction the sun rises and sets in, let alone navigate without GPS. This is why I watch shows such as #Underground.

What amazes me is that when a Tyler Perry movie comes out, we don’t hear nothing about how we’re tired of seeing black men in dresses. I don’t hear anything about how we’re tired of seeing black men and women run around joking all the time about nothing. We make excuses for that. We don’t hear nothing about Fifty Shades of Black, Get Hard, or throwbacks like Don’t Be A Menace to South Central While Drinking Your Juice in the Hood. When Noah and Gods of Egypt came out, I didn’t hear nothing about all the biblical inaccuracies that can be proven just by reading the first few chapters of Genesis. But when it comes to a show comprised of information we need to know, now we’re tired of slave movies even though many of our brothers and sisters don’t even know what the half of slavery was really about and the psychological trauma it still holds today.

I’m still hearing people say that the light skin slaves were house slaves but this is not historically correct. The Mulatto was the first to be sold because the mistress did not want to look at the proof of her husbands infidelity with the “niggers” every time she looked at those children. Not that mulattoes were not in the house, but the point is they were “field niggas” too. There was a ranking system based on skill and worth and it didn’t matter what color you were a slave was a slave. Whether in house or in the field none of it was esteemed over the other you was still a slave. Some of us still think Rosa Parks was the first to refuse to give up her seat on a bus. She was not, but that’s the point. There’s still lots of people who don’t know. We don’t know what Reconstruction was about. We don’t know what Jim Crow was about. We don’t know what The Harlem Renaissance was about, or for a more earlier term, The New Negro Movement. We don’t know what The Civil Rights Movement was about. We don’t even know who The Black Panthers truly were aside from the hateful militia group people tell us they were. Prince just died and they say he had no will. Prince was a man who sued people all the time in regard to the legalities of his career. He’s not the kind of man who would not have a will but this is what they tell us. The point is that we don’t know half of the black history that we think we know and even what we think we know, we don’t really know. What Harriet Tubman and the many others had to endure, I had to endure too. For we are all connected, the human family. We are the bloodline and the experiences of our ancestors  still runs through our veins. They say that if you don’t know your history, that you are bound to repeat it.  This is why I go #Underground.

2 thoughts on “Why I Go #UNDERGROUND”