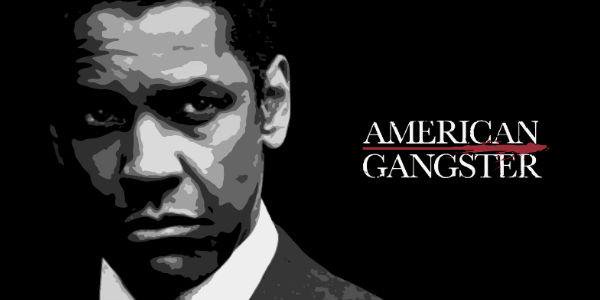 American Gangster is based on the true story of real-life drug kingpin Frank Lucas, who by the 1960s constructed an international drug ring that spanned from New York to South East Asia. The film features Denzel Washington as Lucas and a New York City cop (Russell Crowe) who busted a big-time heroin ring. I have a love-hate relationship with this movie. In no way do I condone selling drugs and yet I will still watch this movie. There’s a little angel on my shoulder, shaking her head in disgust and a little devil smirking at me as we both smile while watching Denzel’s swag.

So anyway, I was watching American Gangster last week, and I started typing away at the notepad on my phone. Somehow, I had managed to think about writing. These days, I watch movies to see if they are written well, educational, and entertaining. Eventually, I had come up with a list of things I learned, and I thought I’d share it with you.

“I want what you got Uncle Frank. I wanna be you.”

One of the most powerful aspects of this movie is the message on Influence. Social influence occurs when someone’s emotions, opinions, or behaviors are affected by others. In the film, Frank’s nephew Stevie Lucas is an excellent baseball player and had been playing since he was a child. Now at the prominent financial level to do so, Frank schedules a meeting for his nephew Stevie (T.I.) with the Dodgers. Stevie does not show up. Now that he was part of his Uncle’s drug enterprise, he no longer had a desire to play ball. Instead, Stevie wants to be a drug kingpin like Frank. This scene is one of the saddest parts of the movie for me when Stevie Lucas says he doesn’t want to play baseball anymore, although that was his passion since childhood. Instead, he wanted to be a drug dealer.

This scene is a reminder that you are not just living for yourself. The decisions you make and the opinions you give do not only belong to you but can influence the people around you. We don’t have to be celebrities or someone great to have influence. Somewhere, in our little corner of the world, someone is listening to us and silently taking our advice. People are watching you whether you know it or not and whether they speak up about it or not. The danger in this is that people will follow your example. Sadly, even when you’re wrong if they admire you enough.

Frank said this to Huey Lucas, his brother, after seeing him hanging out with Nicky Barnes, “one of the biggest heroin dealers in the country,” a 1977 New York Times Magazine article titled “Mister Untouchable” stated. Nicky is known as being arrogant and living an extravagant lifestyle. In the movie, Huey had taken on Nicky’s colorful way of dress and his arrogant demeanor.

There is so much to learn from this quote alone. It goes hand in hand with the phrase, “the more you talk, the less you know.” Usually, it’s the people who are the weakest who makes the most noise.

Frank then turned around and wore an expensive fur, bought by his wife, to the Ali/Fraizer fight–the same “clown suit” he warned his brother not to wear–and stuck out like a sore thumb. This fur is what made the police take notice of him and pay attention to him. From this one mistake, they learned of Franks every move.

The message here is for one to remember to take their own advice, which is not always easy to do if a person is not paying attention. I am sure we all have an instance to which we forgot to take our own advice.

Lesson #3: The Love of Money

“Success has enemies…quitting while you are ahead is not the same as quitting.”

All any black man wants to do is take care of his family, but Frank had a significant role in the direction of his brother’s life. He didn’t have to travel to North Carolina and recruit them in his drug empire. His brothers and cousins were country boys, and while each is entitled to one’s own choices and decisions (his brothers could have decided not to participate after discovering what the business was about), Frank is responsible for his part in taking advantage of his brother’s innocence. Frank was the oldest (if the movie is correct in this portrayal) and they looked up to him. He could have used his influence more positively. Even his mother in the film said: “If you were a preacher they would have all been preachers.” This example goes back to lesson number one. We all have people who watch us and look up to us even if we don’t know it. Frank could have used his money to invest in legit companies for his brothers, leaving them out of the drug business.

There’s a lot to learn about business in this movie. Even though the market here is, unfortunately, selling drugs, I believe you can get a lesson from anything if you’re paying enough attention to it. One of Frank’s many experiences had to do with launching a new product that was cheap but still held quality. Frank stepped outside of the established heroin supply chain by cutting out the middleman and not diluting the heroine. In the 1970s, the heroine was often diluted with sugars, chalk, flour, or powdered milk to stretch it, so ddicts understood that the drug would have a lower potency. To create his one-of-a-kind “product,” Frank went directly to the source, a heroin producer in Saigon, Vietnam. In the movie, Frank didn’t dilute his heroin, which made it more potent. He also sold the undiluted, more potent drug at a lower price.

Lesson #5: Not Everything is as it Seems

The persona of the copy, Richie Roberts, was also exaggerated in the movie. He did not have a child and was not in a custody battle with his ex-wife. He also had a much smaller role in the capturing of Frank Lucas.

The lesson here is to remember to do your research. Don’t just believe the movies you watch, the articles/books you read, or the things that you see on social media. Even salt looks like sugar, and spoiled milk is still white. Always double-check your facts.

Heroin: From the Civil War to the 70s, and Beyond