Do you have a reading room? I do!

Introducing Mr. Couch. This baby is more comfortable than any other piece of furniture in the house. No lie. More than my bed, more than the sofa’s up front. Everything. This baby grabs your buttocks and pulls you into the cushions. Your butt will never experience anything comfier. It then takes the rest of your body and molds itself to your shape so that you fall in. Careful or you’ll find yourself sleeping on the couch from pure bliss.

Of course, a reading room is not a reading room without books. All you need is books, a Kindle (or e-reader of your choice), a notepad and pen. On occasion you can bring your mobile to quickly look stuff up BUT I warn you, the internet will distract you! To get the most out of your reading room, leave your mobile device in the other rooms! 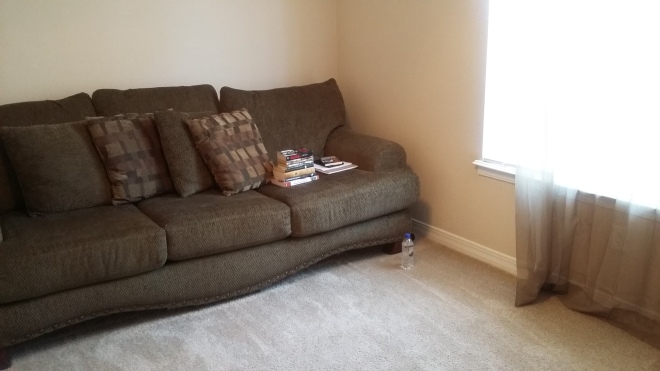 Ahh, yes. The window. No reading room is complete without a window. Not just any window, but one that lets in plenty of sunlight. I always sit right here on the end closer to the window. This is where you can find me reading  your books! Book Reviews are born right here in the reading room. This is my place of solitude where some serious thinking goes on.

War on the Reading Room!

The reading room is empty. There’s nothing here but the big comfy couch, window, books, and an old desk. But, the reading room is under attack people. It appears Mr. Ysrayl is trying to turn it into a man cave!

Suddenly, military plaques appear on the walls. Now, I’m not the smartest person in the world but Mr. Ysrayl does happen to be a veteran. You may say “EC, you’re reaching a bit, come on!” That is when I will point you to Exhibit B.

Again, I’m not the smartest person in the world but…… ???? WHO does these items belong to? Look at the carpet people, the reading room can’t handle this kind of equipment!

Brothers and sisters. I think we have enough to convict Mr. Ysrayl with conspiracy to transform the reading room into a man cave. I don’t know what we’re going to do. Unless we add another book shelf to the reading room AND something pink to reestablish our domain. Man cave, you’re going down!

Last week I published a post called “Unfamiliar Faces – Lost to History” where I listed a few people who were affiliated with major historical events in some way but whom we do not hear much about. I stated that I will attempt to list a few every Thursday. This is not a promise. I will do my best, but most of the faces of the truly unknown are not on Google but are hidden inside the pages of books I’d have to revisit, articles and documentaries. Below are four more faces of the unknown I found this week: 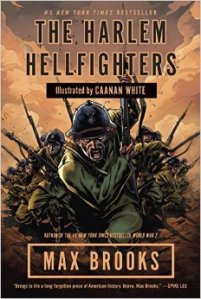 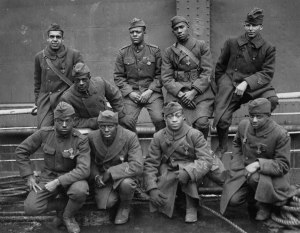 For those who didn’t already know, African Americans have fought in every major war. Little is known of one of the few black combat regiments of World War I. Nicknamed “The Harlem Hellfighters”, February 17th, the day of their battle, became an unofficial holiday. On February 18th of 1919, 3,000 veterans of the 369th Infantry (formerly known as the 15th Colored Regiment) paraded up Fifth Avenue at 23rd Street to 145th and Lenox for the prestigious Croix de Guerre from the French army. 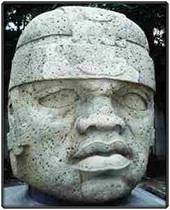 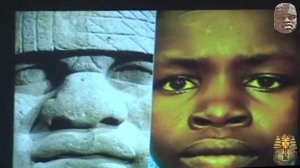 The Olmecs, whose features are similar to that of the African and Asian, are another part of black history we do not often hear about. They, The Olmecs, carved about twenty-two colossal stone heads in the southern parts of Mexico with their likeness and their influence have been found in Guatemala and further south. Olmec type sculptures have also been found in parts of the U.S. In fact, I am not sure if its still there, but there was an Olmec head on the property of The Field Museum in Chicago. If its still there, it should be somewhere near the back for those of you who are in the city.

The Olmecs and other pre-columbian Blacks of the Americas were part of a prehistoric trade network that began in Africa and spread worldwide over 100,000 years ago and at various periods afterwards. To learn more about them, read They Came Before Columbus by Ivan Van Sertima and Susu Economics: The History of Pan-African Trade, Commerce, Money and Wealth.

A military police officer stationed in Maryland, was on leave to visit his sick wife when he was ordered off a bus by a police officer and shot dead. The police officer may have mistaken Ducksworth for a “freedom rider” who was testing bus desegregation laws.

When my husband and I went to the movies about a month ago, a man had on a shirt displaying The Triple Nickle. My husband, former military, stopped and sparked up a conversation with the man. He was surprised to see it since no one really knew who they were. To our surprise, neither did the man. He was just wearing the shirt.