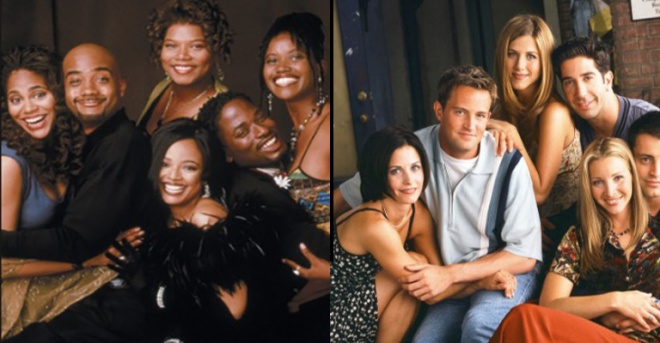 Note: Due to the content of this post I am filing it under Black History Fun Fact Friday.

Erika Alexander (Max/Maxine Shaw/Pam, Living Single) did an interview with The Breakfast Club (I want to say it aired yesterday?? 1/29) that brought out some interesting facts. (Funny because she was not supposed to be a regular on Living Single but…). Like I tell people, Black History INCLUDES music, television, film, art, and much more.

Yvette Lee Bowser created Living Single for Warner Bros and it debuted in 1993. One of the original suggested titles was Friends. Asked if he could have any show on TV, NBC’s President said Living Single. Queen Latifah’s show’s suggested title was called My Girls when they first did their pilot according to Erika Alexander, but it didn’t do well. The networks then chose Living Single, and then the next year they named a separate show Friends. But you got that much from The Breakfast Club. Let’s go a little deeper.

What was really behind the networks naming this show “Living Single?”

Was it the stereotype or assumption that Black men weren’t present that led them to the decision that the black show should be called Living Single? (“We are living Single…”) instead of Friends? (Because I mean, the sistas on Living Single were Besties, you hear me? They were really Friends. Sooo I got questions…)

I know ya’ll probably think I’m reaching so …if you think this is too far-fetched, consider Good Times.

Good Times only had a father figure because Esther Rolle fought for one.

Originally, the show would be based on a single woman raising her kids in the projects in Chicago (I am from Chicago AND I grew up in the projects, trust… we know these things). Rolle said no, she wanted a father for her children and she became a pioneer in fighting for a black father on TV: George Jefferson (played by Sherman Hemsley) on The Jeffersons, Cliff Huxtable (played by Bill Cosby) on The Cosby Show, Phillip Banks (played by James Avery) on The Fresh Prince of Bel-Air. The list goes on and on but one woman opened the door for a complete black family to be shown on television and her name is Esther Rolle.

Good Times was revolutionary because it broke ground not only by showing a low-income family on television but also, a COMPLETE black family. The list of shows Good Times inspired is too numerous to mention, including NBC’s 227 in 1985, Regina King’s first breakout role. Then, in 1989, ABC launched Family Matters as their answer to 227. UPN sought to create the magic of the Cosby Show with Moesha in 1996. It goes on and on and down hill from here…

“I just thought it was a poor representation of what Black women were being able to do. And frankly, if you didn’t fit in that mold, there was nothing you could do. It was like watching a train wreck. I actually didn’t think it was real at first. Took me a long time to sort of  get that, no this is real, and yet, it’s not real.”

– Erika Alexander on the Reality TV Shows, The Breakfast Club

The black father was the hardest legacy Rolle fought for. She grew up with one and an intact family; she wanted that to be shown on television. “I had a wonderful father,” said Esther Rolle, “and I couldn’t bear that television virtually ignored black fathers. I could not compound the lie that black fathers don’t care about their children,” she said previously in media reports. “I ruffle a lot of feathers. And I’m also selective–that makes you a troublemaker, but so be it. I laid a cornerstone for black actors, and that makes me happy.”

Although Rolle worked hard for a black father, they still eventually killed James off. So, I ask, what was the real reason behind naming the “Black” show, Living Single Hmm? That is the question.