Since this is the first week of our return, I decided I won’t go in hard. For our welcome back I decided to choose a movie that’s light and fun. One that is entertaining but also has many lessons that we can learn from. It’s been a minute since I’ve seen it but don’t worry, doggie and me was more than happy to re-watch it for you. To be transparent, I am watching it as I am writing this.

There aren’t many movies I watch just for entertainment but I do love this one (I’m a sucker for all black casts! Gotta love my people).  Probably one of Terrance Howard’s funniest roles, let’s jump right in shall we? 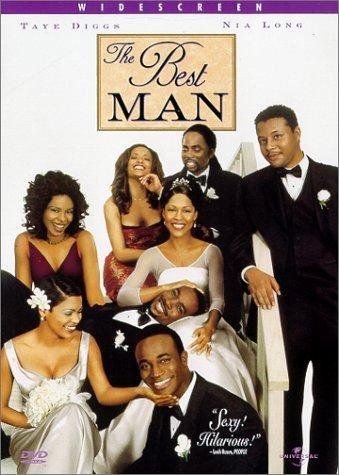 “Harper Stewart (Diggs) is a young man living in Chicago with his beautiful and devoted girlfriend, Robyn (Lathan). However, Harper has a professional life as an author and is on the verge of a major breakthrough. He is hesitant about committing to a woman. Harper’s debut novel, Unfinished Business, has been selected by Oprah’s Book Club, pretty much guaranteeing him a bestseller.

Harper travels to New York City, where his best friend, Lance (Chestnut), who is a running back for the New York Giants, is getting married to a young lady named Mia (Calhoun), who is also an old friend of Harper’s. Harper is picked up at the airport by his friend, Murch (Perrineau), and they catch up in the car. Eventually, they meet up with Jordan (Long), Harper’s old what-could-have-been female friend who has obtained an advanced copy of his book and has been passing it around their inner circle of friends. Due to its autobiographical nature, Harper never intended for any of them to read “Unfinished Business” prior to the wedding.”

A romantic comedy, the movie surrounds the friendship between Harper and Lance leading up to his wedding. Harper is Lance’s Best Man and the movie deals with the tension building up to the point where Lance reads the book written by Harper and the truth concerning his perfect little Mia. Stupidly, Harper has laid out all the juicy details in his book.

What I love about this movie is that it has laughs, drama, and a message. It is not a movie I watch all the time anymore but whenever I need to relax to a laugh I put it on. Here are some bullet points and dear authors, don’t be Harper.

#1. Never write a fictional book based on real life events that you don’t want to get out.

This was by far the stupidest thing ever. First off, everyone knew who was who in the book, so even though Harper tried disguising the individuals, it was still apparent who they were. Harper, these are your college friends you still keep in touch with. They know you well. Did you really think they wouldn’t know who they were? People, if you want to air your dirty laundry then just do it. Don’t write a book about it.

Murch and Shelby’s relationship is annoying. It’s annoying because the woman is controlling and the man is too weak to call her on it. We are supposed to be there to support our men, to stand by them, and to help them, not to control their every move. Men are natural leaders. Let them lead!

Candy was a stripper yes but she ended up being the perfect match for Murch.

One minute Lance is quoting the bible and the next he’s giving Harper permission to cheat.

The more we try to control what is beyond our reach, the more mistakes we are bound to make. Everything also happens for a reason. If Lance would have never found out, maybe Harper would not have appreciated Robyn the way he did in the end and the information could have come up later in Lance marriage and destroyed it.

Forgiveness is powerful not just because of how it changes the individual but how it changes everyone involved. You are not forgiving just for their sake, but for yours. Forgiveness is powerful because what goes around, comes around. The energy you put out will come back. It’s inevitable. If you want to be forgiven of your mistakes, then you must be willing to forgive others. It’s the only way.

As I did before, here’s the trailer to The Best Man and no, I do not recommend Best Man Holiday. As much as I love this movie I did not like the sequel. Not only do I not celebrate holidays but part two was just …whack. Some movies cannot be remade.