They say the eye is the window to the soul. A camera if you will, into the heart of man. The defining moment of his realness, or the fabrication of his persona. What does a photographic heart look like? Can I stare into your eyes and take with me an image of your intention? I marvel at the eye’s genuine and the revelation of the tongue. A man ponders in his mind the person he is and speaks his heart into existence. A dark person cannot hide behind his eyes, and a good soul cannot produce a contradicting reflection. The bond between the mind and the heart gives way to sight, and gives birth to the eyes to see. We can discern the shape of thought just by the color of words. We can lift the eyelid of speech and stare down the throat of truth. It is a discernment not everyone will possess; the ability to see beyond what you could see. 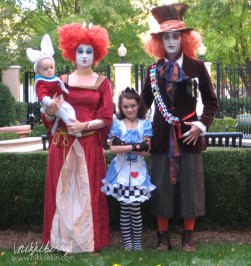 October is here. Parents are stocking the closets with the best goodies. Others are hanging skeleton bones in bushes, hiding pretend mice behind counters, and preparing pumpkin pie recipes. On the other side of the coin, children are deciding which of their favorite hero to honor this year, how long should the witches nose be, how much paint are clowns supposed to wear, and if their tooth fairy costume will really make them fly. Sounds innocent enough, after all, it’s just about candy, kids, and costumes…right?

Samhain (pronounced Sow-en), dates back to the ancient Celts who lived 2,000 years ago. It is a Celtic word meaning “summer’s end.” The Celts believed that summer came to an end on October 31st and the New Year began on November 1st with the start of winter. They based this on the Solstice. A solstice is an astronomical event that occurs twice each year as the Sun reaches its highest or lowest point. The word solstice is derived from the Latin sol (sun) and sistere (to stand still), because at the solstices, the Sun stands still coming to a complete stop before reversing direction. The solstices, together with the equinoxes, are connected with the seasons. In many cultures the solstices mark either the beginning or the midpoint of winter and summer. The summer solstice occurs when the tilt of a planet’s semi-axis, in either the northern or the southern hemisphere, is most inclined toward the sun. The Celts believed the end of the summer solstice was the end of the year, which they believed began on November 1st. But the Celts celebrations began at sunset the night before (10/31).

But the Origin of Halloween is deeper than a Celtic celebration of a new year. It wasn’t that November 1st marked a New Year; it was that it marked the opening of the door for the open worship of the Gods, Goddess, and sacrifices (Suicide rates during the Holiday season is no coincidence). At sunset on October 31, clans or local villages began the ceremonies of Samhain (Halloween’s government name) by lighting a giant bonfire. The people would gather around the fire to burn crops and animals as sacrifices to the Celtic Gods. It was a method of giving the Gods and Goddesses their share of the previous year’s herd or crops. 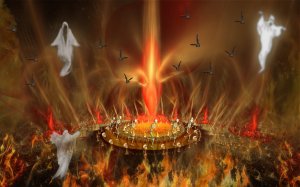 The Celts wore costumes first to honor the dead who were allowed to rise from the spirit world. The Celts believed that souls were set free from the land of the dead during the eve of Samhain. Those that had been trapped in the bodies of animals were released by the Lord of the Dead and sent to their new incarnations. The wearing of these costumes signified the release of these souls into the physical world. Scripturally, when someone dies their breath goes back to the creator and their body back to the dirt. A person’s soul is just their physical self, their body, and their spirit is the breath of life which animates or makes alive that soul, or body. But many consider a person’s soul to be some tiny piece of them that is set free to go to heaven after they die. This comes from the time when Giants walked the Earth; the  offspring of human and angelic relations, they were a combination of flesh and spirit. When they died, their flesh returned to the Earth, but their spirit lived on. Mankind does not have a spirit living inside of him. The only spirit mankind has is his breath of life, but there is no tiny you inside of you. Though this is a belief of many, it is not a biblical fact, thus, when the Celts mention the souls of the dead rising, they are not speaking of actual people rising from the dead. They are speaking of an increase in demonic activity. It was believed for example, that a thin veil between the physical world and the spiritual world provided extra energy for communications between the living and the dead. Again, they’re not talking about dead people because dead people do not speak. Dead people’s bodies have been returned to the earth and their spirit, which composes all of their intellect and consciousness, has returned to the father until a later time. So when this communication takes place it is actually extra energy for communications with demons. 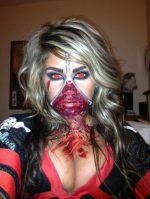 Moving on, the Celts believed not all of these souls were honored and respected. Some they said were also feared as they would return to the physical world and destroy crops, hide livestock or ‘haunt‘ the living that may have done them wrong. Again, what is being described here is the activity of demons, invoked by the massive energy bestowed upon them by those participating in this celebration. The second reason for these traditional costumes has to do with the first reason, to hide from these demonic spirits, and to escape their trickery.

With the coming of Christianity, the early Church in England tried to Christianize the old Celtic festivals. In other words, since Christianity was filled with Paganism itself, they had to hide the true meaning behind Halloween if they were going to appease the pagan priesthood and continue to include it in their doctrine. So Pope Boniface IV designated the 1st of November as “All Saints Day,” and October 31st as “All Hallows Eve“, that eventually became Hallow’een. Scholars today widely accept that the Pope was attempting to replace the earlier Celtic pagan festival with a church-sanctioned holiday. As this Christian holiday spread, the name evolved as well; also called All-hallows Eve or All-hallowmas (from Middle English Alholowmesse meaning All Saints’ Day). Later, the church made November 2nd  All Souls’ Day, a day to honor the dead. It is celebrated similarly to Samhain, with big bonfires, parades, and dressing up in costumes as saints, angels, and devils. Together, the three celebrations, The eve of All Saints’, All Saints’, and All Souls Day, are called Hallowmas. Halloween was also given another title, “Harvest Festival”, (this is supposed to make it sound less evil though it’s the same celebration).

The Evolution Of Halloween 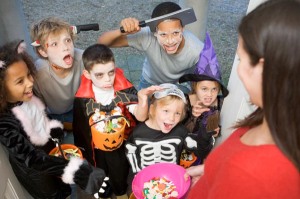 “Trick-or-treating” is a modern tradition that probably finds its roots in the early All Souls’ Day parades in England. During the festivities, poor citizens would beg for food and families would give them pastries called “soul cakes” in return for their promise to pray for the family’s dead relatives. The distribution of soul cakes was encouraged by the church as a way to replace the ancient practice of leaving food and wine for roaming spirits. The practice, which was referred to as “going a-souling” was eventually taken up by children who would visit the houses in their neighborhood and be given ale, food, and money. 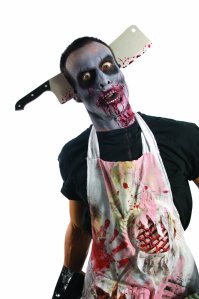 “Dressing up” for Halloween gets it roots from dressing up around the sacred bonfire during the original Celtic festival. Some suggest this practice originates from England, when it was believed that ghosts came back to the earthly world on Halloween. People thought that they would encounter ghosts (FYI: what people call ghost are actually demonic spirits) if they left their homes, so to avoid being recognized people would wear masks after dark so that the ghosts would mistake them for fellow spirits. In addition, people would place bowls of food outside their homes to appease the ghosts and prevent them from attempting to enter or cause harm to their homes; a tradition obviously taken from the ancient Celtic pagans.

Despite its name change and a few switches around of the celebrations, it is still the same celebration. Participants are still giving their energy over to the Gods and are still communicating with demons. Remember, you can choose not to agree, but it won’t make it any less true.