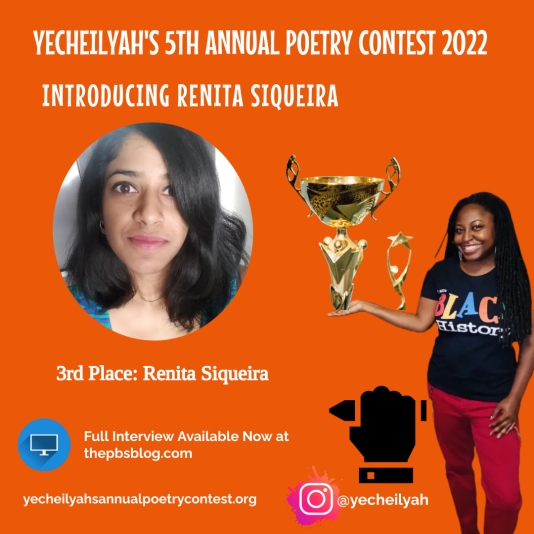 Today, we introduce you to Renita Siqueira, whose poem “Allowed to Exist” placed third in our fifth annual poetry contest.

Renita, Welcome to The PBS Blog! 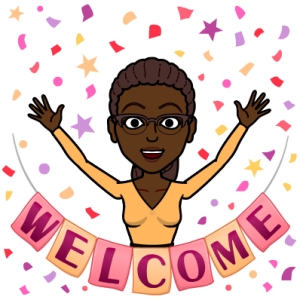 What is your name, and where are you from?

I’m Renita Siqueira and I’m from a city called Pune in India.

When did you first fall in love with poetry?

It was during one of the Literature lectures in college. My professor explained the meaning of each line of a poem. I sadly don’t remember which poem it was, but for the first time, I realized poems are not as simple as they can seem to be. There is a technique, rhythm, music, and a lot of thought that goes into writing them. They can evoke feelings, stir up memories, lead to uprisings, and connect strangers. They are powerful! With the beauty of imagery and different figures of speech, you can write about something without mentioning it at all and leave it up to the reader to draw their own conclusions.

Your poem stood out because you gave us a glimpse of life on the other side of the world.

Please, tell us what inspired your poem.

There is an increasing intolerance in my country to differences in various things, such as opinions, beliefs, and religious practices, to mention a few. I was shocked to read the news that young Muslim girls were asked to remove their burkhas and hijabs if they wanted to step inside the classroom. They had to choose between two BASIC human rights—the right to free primary education and the right to practice one’s religion freely. I’ve grown up reading about women like Savitribai Phule and others who pioneered women’s education back in 1948, and here we are in 2022. Disheartening!

Today, it isn’t uncommon to read about mobs, lynching, someone being attacked based on religious grounds, being discriminated against for favouring/supporting a particular political party, etc. People are trying to speak up, but many voices are silenced under various garbs without reason.

There is a powerful line that says:

“Now, the punches break walls and bones and homes
with unveiled ferocity
no admonishments, no penalties.”

Can you break this down for us?

There has been an increase in caste and religion-based hate crimes in India. People from minorities or certain castes have been subjected to mobs, lynching, and attacks on them and their property. There have been cases where people have been forced to sing slogans of another religion just to stay safe. Rana Ayyub, one of our most outspoken journalists, has been a victim of incessant trolling and threats. Many of the perpetrators of these activities have gone scot-free. If you read the article about hate crimes, you’ll see that some of these horrific crimes were not even reported or acknowledged.

Today, sadly, such stories of violence have become so common that they’ve become just another statistic.

If you could have lunch with your favorite poet, living or dead who would it be?

Can I cheat and name two? My favourite poet alive is Sarah Kay. I first came across a video of her performance with Phil Kaye on YouTube. The vocabulary in her poems is simple, but the subjects and writing make you feel the depth of it.

Yes, I am familiar with Sarah Kay! Amazing talent.

My other inspiration is Maya Angelou. I didn’t know much about her when a friend lent me ‘I Know Why The Caged Bird Sings’, but later, I kept hearing references to her from different people. I get goosebumps whenever I read or hear her performance of ‘Still I Rise.’

I know right! Maya was amazing.

What inspired your writing journey?

I am quiet, an introvert, and most often found listening to what others have to say. But I am also very observant, creative, and perceptive and have my own take on things. The bio on my first blog read, ‘I express myself better through the written word to convey unseen feelings and unheard thoughts :)’. Ten years later, I find myself better at expressing my thoughts vocally, but I still prefer the written word. I received a lot of encouragement from my family and friends. Moreover, when people shared that they liked what I wrote or it made them think, that encouraged me to keep writing and trying to hone it.

On a side note, I like writing in rhymes, but sadly, it’s not considered serious poetry.

Have you ever performed your poetry before an audience?

I was first introduced to live spoken word when I was in Bombay and attended an event curated by Rochelle D’Silva. She was amazing! I’ve fangirled over Sarah Kay and Phil Kaye, read Nikita Gill, and listened to Megha Rao’s podcast. It was so cool that I wanted to give it a try.

I ended up reading, instead of reciting, my poems a few times out of fear of forgetting. It was very nerve-wracking. Yet, as poets, we know exactly which words require emphasis, where to slow down and pick up the pace, where to pause, etc. If I practice long and hard enough and gather enough courage, I would love to give spoken word a try.

I think you’ll do great.

What Does Freedom Mean to You?

To me, freedom means the ability to ‘live and let live’ without impeding on someone else’s right to live, and their way of living shouldn’t affect mine. I’ve grown up practicing ‘Do unto others as you would have them do to you’. If I don’t want to be discriminated against, want to read, eat, travel, and do the things that give me joy, I also need to make sure I don’t step on someone’s right to do the same.

Freedom has been a recurring theme in my writings. Some of them are Dreaming of Freedom in a Totalitarian Rule, Freedom* (Terms & conditions apply) and Some wrongs are forever.

What advice would you give to people who want to pursue a career in poetry?

I’m learning myself, so I’m not sure whether I can advise. My Manager says the best way to improve at anything is through practice and exposure. So, keep writing and reading. Be okay with being mediocre in the beginning; everyone has to start somewhere. Diamonds shine only after all the polishing, right? Don’t discount yourself, don’t assume publishers will not like what you write. Write it anyway, share it anyway. Most often, there’s more to gain than to lose. And give up the idea of ‘perfection’—a perfect word, a perfect poem, a perfect time. If perfection existed, progress wouldn’t.

Please, tell us more about your work.

I am an instructional designer, freelance writer, and poet. I’ve written for various publications on the environment, healthcare, gender, and socio-political issues.

Where do you see yourself a year from now?

I’m a work in progress. I’ll be reading and writing for sure, developing new interests and hobbies, learning and growing, and, fingers crossed, having a book published.

Now, let’s get to this poem!

“Allowed to Exist” by Renita Siqueira

from the golden bird of the east,

the land of riches, of diversity, of hospitality…

Here, you could find men

with a turban, a taqiyah, a crucifix and a sacred thread

Here, you could find women

permitted to pick up pen and paper

and right their own futures.

Here, you could agree to disagree,

roll with the punches

without bleeding life and its dignity.

Here, we celebrated each other in our own ways

bowing to our different gods, because

They were allowed to exist…

from the land of saffron,

the land of poverty, of conformity, of not bigotry… yet.

You are (not) welcomed;

Here, you will find men

but the turban, the taqiyah, the crucifix must remain hidden;

The tales are replaced

But must strip their personal beliefs at the classroom door

if they want an education.

Here you can say your prayers

but not too loud.

Now, the punches break walls and bones and homes

no admonishments, no penalties

if you dare to swim against the tide of saffron

which began through trickles but now threatens

to wipe you out.

Here, history is being rewritten or expunged.

Did Orwell foresee what would happen in the land of his birth?

Here, we celebrate what’s left of ourselves

within our boxes, hiding our labels

without stepping out of line

bowing our heads to one god

the only god that’s allowed to exist…

Renita Siqueira is from India. Growing up in a family of readers and teachers, and with lots of books, she finds recourse in words. She found poetry, or rather poetry found her during college when she was encouraged to take part in a poetry competition. Since then, she hasn’t stopped writing. She’s an instructional designer by profession, poet by passion and hopes to have her own books of poems published someday.

Being a creative person, she draws, paints, sings, dances (in her bedroom), lovingly makes handmade gifts and does a bit of gardening. She enjoys traveling and loves train rides. She’s constantly on the lookout to learn something new and grow. “Though she be but little, she is fierce!”

Wanna join the fun next year? Head over to yecheilyahsannualpoetrycontest.org and join the wait-list for 2023!