This isn’t my favorite movie (It’s actually been a long time since I’ve seen it) but it is one of those coming of age movies I liked growing up. While I don’t like everything about it, like all the movies I enjoy, it does combine elements from some of my favorite things. Before we get into some of what I love about it, let’s get a quick glance at what this movie is about.

In this sequel, Las Vegas performer Deloris Van Cartier (Whoopi Goldberg) is surprised by a visit from her nun friends, including Sister Mary Patrick (Kathy Najimy) and Sister Mary Lazarus (Mary Wickes). It appears Deloris is needed in her nun guise as Sister Mary Clarence to help teach music to teens at a troubled school in hopes of keeping the facility from closing at the hands of Mr. Crisp (James Coburn), a callous administrator. Can Deloris shape the rowdy kids into a real choir?

As you can see this is a sequel but I am not a fan of the first one. I’m not a Christian/Catholic and I just wasn’t moved. I think what made me enjoy this one though is the element of the youth being involved. To me they literally made the movie.

Letters to a Young Poet – The first time I heard of Maria Rainer Rilke was watching this movie. It’s funny because in the example Deloris used to encourage one of her more rebellious students (Rita played by Lauryn Hill), she used an example in which she talked about writing. saying: 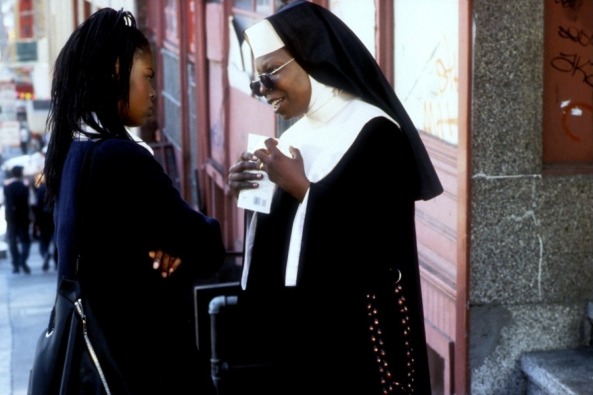 “Don’t ask me about being a writer. If when you wake up in the morning you couldn’t think of nothing but writing, then you’re a writer.”

She was comparing this to the young woman’s desire to sing and that if she wakes up wanting to sing, then she’s supposed to be a singer. Not only did I believe what Deloris said (that if I woke up and all I could think about was writing then I’m a writer) but I also went out and bought the book when I grew up. (You gotta understand I was only six when this movie came out and didn’t see it until I was a little older). Sometimes I would watch the movie just to see this one part. Since I thought about writing, I knew she was talking about me.

Comedy – Of course, I love Whoopi’s comedy in the movie as well as the other women playing the nuns. I love to laugh and will rarely pass up a movie that gives a few chuckles.

Music – One of my favorite things about the movie is obviously the music. I loved hearing the kids voices and watching them transition as the choir began to take shape. And of course ya’ll know they jammed at the end.

Investing in our Youth – Just the fact that the movie is about someone taking the time to invest something positive into the lives of children is a huge plus for me. Now, it’s no Lean on Me but its still cool. The students were, as the description calls them “rowdy” when Deloris first met them. Talking back and playing cruel tricks on their teacher. Largely Black and Hispanic, the children live in the community and are barely being taught as the school does not have enough money for books. In fact, the school is in danger of closing down due to a lack of funding and of course, this will displace the children to schools in other districts. I liked seeing the different personalities of the children and seeing how they grew throughout the movie. With a passion for singing it is possible that they could be the first in their families to graduate and do something with their lives they never thought possible.

Some of my favorite quotes:

“If you wanna go somewhere, if you wanna be somebody, then you better wake up and pay attention. Cause the world out there don’t care how cool you think you are or who you kick it with. It don’t matter. If you don’t have an education, you don’t have anything and that’s the truth honey.”

“So because you think they sang it better, ya’ll are ready to leave cause you got scared…Let me remind you of something OK? If you wanna go somewhere and you wanna be somebody you better wake up and pay attention because if every time something scary comes up you wanna run, ya’ll are gonna be running for the rest of your lives.”

5 thoughts on “Movie Night Friday – Sister Act 2: Back in the Habit”