Guess whoose bizzaack! That’s right, Movie Night Friday! I’ve been thinking it over for awhile and I think this will be a fun re-edition to this blog. For a little PBS Blog History,  a year ago I started Movie Night Friday. I did this because I wanted you all to get to know me better through the movies I watch. One thing I am always seeking to do is build better relationships with my readers. I also wanted to show that this blog is about more than writing, but provides a variety of subject matter. However, Movie Night Friday did not do very well and in an attempt to ensure growth, I moved it to its own page. In this way, anyone who is interested can go back and take a look-see. If you’d like to check out some of my favorite movies, Click Here.

I have decided to revamp MNF and to try and keep it going. To celebrate, I am introducing a new badge:

Isn’t he cute!? I love doggies and (aside from waiting until we move back into the country so I can get one!), I thought this would be an excellent re-boost to this feature. This little guy will be joining us every Friday and he is so ready to watch movies. That said, let’s get on into it, shall we? 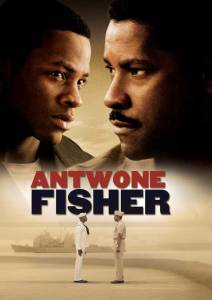 In addition to the movies I’ve already talked about, another movie I really enjoy is Antwone Fisher. Being from the south side of Chicago and growing up in Robert Taylor I am no stranger to struggle, both economically and psychologically. I know how it feels to feel abandoned and in a desperate need to find oneself. I can even relate to him being in a foster home. So this movie really pulls at my heart strings. It has all of the elements that I think makes for a good film, emotional intensity, action, drama, and of course, a little romance. Antwone Fisher is also a true story which makes it even better. It’s not just a fictional tale but factual accounts of what really happened to someone. Here’s a snippet of what the movie is about:

“The touching story of a sailor (Derek Luke) who, prone to violent outbursts, is sent to a naval psychiatrist (Denzel Washington) for help. Refusing at first to open up, the young man eventually breaks down and reveals a horrific childhood. Through the guidance of his new doctor, he confronts his painful past and begins a quest to find the family he never knew.” 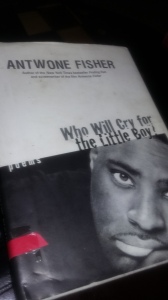 Yea that’s right, Denzel is in this one so you already know its on point. Antwone Fisher, the man, is also….wait for it…a poet. Among other things. I am proud to say that I have a collection of his poetry on my shelf, “Who Will Cry For The Little Boy?” (Don’t ask me why it looks like that! I’ve had it awhile obviously and yes,  before the movie lol…< He recites his poem by this name in the movie). He also has a memoir entitled: Finding Fish, which I do believe started it all, and his most recent work (2010) “A Boy Should Know How to Tie a Tie”. Below is a snippet from Wikipedia on the man behind the movie:

“Fisher was born in prison to a single mother. His father Eddie Elkins had been shot dead by a jealous girlfriend two months earlier. Antwone was placed in a foster home weeks after he was born and remained in foster care through most of his childhood. After living with a foster mother for two years, Fisher was taken away from her. He was then planed into another foster home with a family named the Picketts. He spent 14 years of his childhood with the Picketts and was abused physically, verbally, and sexually. He was then moved from the Pickett home after having a fight with hi foster mother. Antwone was sent to George Junior Republic School, a discipline school for boys, from which he graduated prior to joining the United States Navy.

After three years with the Bureau of Prisons, he began to work as a security guard for Sony Pictures. It was there Fisher decided to find his true family members. He contacted Annette Elkins, who turned out to be his aunt. Within months of this contact, Fisher met all of his family, including his mother Eva Mae. He learned that she had given birth to four other children who were taken away as wards of the state. Fisher said after their meeting, “In the place inside me where hurt of abandonment had been, now only compassion lived.”

Most of this is portrayed in the movie (except the mention of his brothers and sisters) and the director did a great job, who is by the way, Denzel Washington. Luke is also a very good actor and very handsome. Denzel better watch out now, the ladies love Luke. LOL. Below is the Trailer to the movie and as always, thank you for stopping by!