A blank faced lyric
how dull is the stare of a ball point pen
bleeding empty
This collection of words all myth in mouth
colorful descriptions
that cannot pierce the skin
or cut the bone and tendons of image
What lay beyond the composition of a word undefined
What triviality is a tasteless meal
What kind of food is this
What scarlet
What fine silk
What significance are thoughts under ball pointed pens
that have no pixel
And cannot paint
That cannot walk across the bottomless ocean of sing
Cannot sing this gut
What rebellious tongue
What confusing blood from bleeding pens
Something strange these destinations duplicate
Copied vision
No fire
No engines and bare fist
No fight beyond the pretty
No pretty beyond the picture
twisted mouths
no open minds
Do you mind?
writing me a picture
viewable beyond my eyes
write me something I can see
with my gut
and feel underneath my skin
no just sound good
no just feel euphoria
but write me a picture
beyond ball pointed pens
and pixels 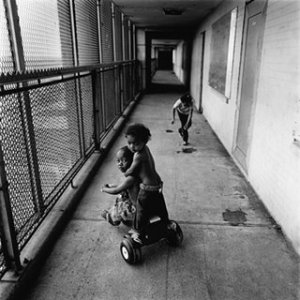 Our family survived off welfare and from that end I know it to be helpful. It was however, a possessive lover. In Robert Taylor, no one’s father was present since their mother’s couldn’t receive welfare with them. But not that men weren’t present; their existence was obvious since the projects themselves overflowed with innocence. Thousands of children the byproduct of casual sex, and drive by love pieced together somehow between the cracks of the doors left open by the ladies from the welfare office, who searched everywhere but the crack of your buttocks to ensure it wasn’t present. So the men were around, fathers of children who knew them as nothing more than the Ray Ray’s and Big Mikes of the block. Men who sort of hung out on the corners or underneath the beds of open women, too filled with desire and dreams to deny a no-good-man a place between her legs. So the kids kept coming, the men kept leaving, and the welfare office remained packed. And if it, the Welfare, sensed anything positive had taken place, even if it was a new hairstyle, they needed to know from where the money had come, how much was it and how often was it around so they may deduct that amount from the meager rations they were already giving out. It didn’t matter if it was a jar of peanut butter or a new hat, if it was expected to come from an additional money source, it would be calculated and deducted from the monthly government assistance.

If she was found to have a man living with her, whether he worked or not, she could lose her money altogether. Not only was my father not around, but my Uncle had to make a covenant with the closet when the social worker came by. You see, a man’s  presence was a threat to the relationship between a woman and her government. Thus the poor were required to remain so in the buildings if they desired to receive the little nothings they were receiving from Welfare. If they showed any sense of pride that required a level of discretion at what we commonly referred to as, “The Aid-Office”, it was as if the clerk had been instructed to repeat their business louder than the person obviously desired over the intercom so that the entire room could hear it; this made it extremely embarrassing to visit the office.

If by any chance the women wanted a divorce by acquiring some fancy job, the government made sure to snatch away all its benefits so that she is better off to remain part of the relationship than to do away with it. What use is a “good job” when she can’t afford to pay the rent if it increases because of her salary? Or what use is a “good job” when she can no longer receive Medicaid for children who are constantly bleeding from the violence of their environment? This is a place where children used garbage dumps as a playground. What use is it, of a “good job”, when she can no longer receive food stamps as a means to feed her children? It is thus better for her to stay married, financially, to the system than to get a “good job” that leaves her just over broke and in the same situation as she started out as. Marriage? Out the question, she can lose her benefits by daring to marry her children’s father—she wasn’t allowed to have one in the home, let alone marry him. Needless to say, the system divided more than it brought together, and was quite jealous and possessive of its lover, the Black Woman.

I would like to publish a memoir one day. While I am still  in the infancy stages of understanding memoir writing, I have taken to writing down bits and pieces of my life story and publishing excerpts to this blog for practice.